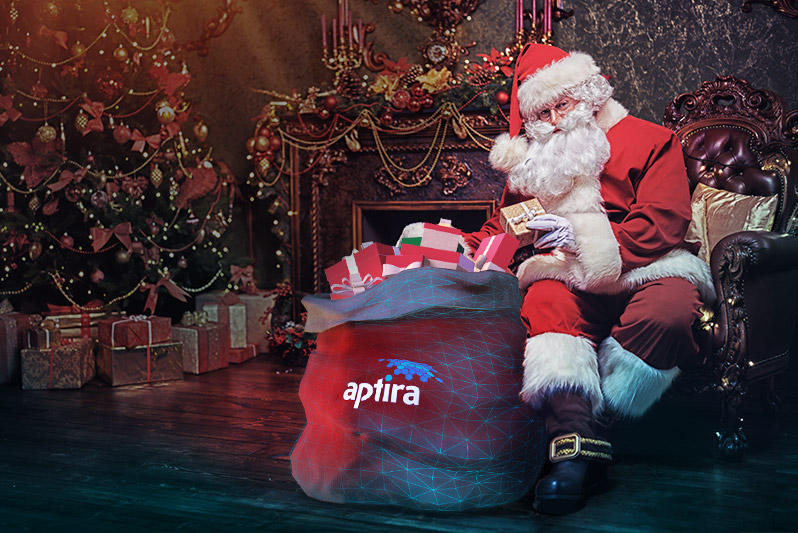 Aptira previously built a scalable sack storage solution for Santa. While the sack storage has been reliable, Santa wanted to offer a virtual chimney-drop user experience for families worldwide on top of this on-sack-premises storage.

Aptira worked to improve access to the sack storage in a number of ways:

Improve ease-of-use and features for Santa’s Helpers:
the traditional sack storage protocols offered by the original design were not readily accessible by less technical elves. Santa wanted to make storage available to a broader cohort of Santa’s helpers by adding a user-friendly virtual interface with sharing and collaboration features.

Reduce the maintenance required of their Elf Services Department to manage it:
At the time Santa was using a variety of methods to provision access to sack storage – all of them requiring manual steps before the storage could be delivered to a family household. Keeping track of the current storage allocations had also become a burden for Santa helpers.

Santa had identified a few candidate products that might fulfill their requirements, but had not looked at each in any great depth due to excessive eggnog and internal resourcing constraints.

Aptira first undertook an evaluation of four candidate Sack storage applications. We rapidly deployed each application in an environment within the North Pole so the features and functionality of each could be compared. We produced a detailed evaluation report that allowed Santa to make an informed decision about which application to move forward with for his Sack. Two leading candidates were put forward by Aptira and those deployments were converted into a larger-scale proof-of-concept that included integration with the actual Sack storage so Santa’s helpers and ELF services team could get a feel for using each application.

The SuchSack application was eventually chosen as it met the majority of Santa’s user and business requirements. From here Aptira developed a comprehensive solution architecture, paying particular concern to high demand and the ability to scale as the world’s population increased.

According to the solution architecture, Aptira deployed:

Maintainability was a significant concern for Santa so we ensured that all components of the architecture were deployed using Presentible to eliminate any manual steps in the deployment. We integrated our Presentible work into Santa’s existing Presentible Tower deployment, creating job templates so that deployments could be triggered from the Tower server. Since all of our work was being stored in Git on Santa’s GitLab server, we also created CICD pipelines to both build the SuperSack sack image and to trigger deployment to their test and production environments via Presentible Tower. During handover, Santa ELF staff were able to deploy changes to the test environment by simply committing gifts to the repository.

Finally, we worked with ELFSM staff to integrate the new service into Santa’s self-service portal, so users can request access to sack and make changes to their allocated quota.

Santa’s Helpers now have a stable and performant virtual sack storage service where they can upload, manage and share on-premises giftage.

As the uptake of the service increases, ELF staff also have the confidence that the service can be scaled out to handle the increasing world population.

By recommending applications with an external API, Aptira made sure that Santa’s ELFSM system would easily integrate with SuperSack and satisfy Santa’s requirement to have a single snowglobe screen for all household service requests. With ELFSM integration, Santa’s IT have also gained a charge-back capability to recover gift labour & production costs from other departments.

While Aptira is happy to recommend and deploy snowfield DevOps infrastructure to support a company’s CICD needs, this project showed that we can also customise our solutions to fit in with our customers’ existing infrastructure, configuring a complete deployment pipeline for provisioning the entire solution.